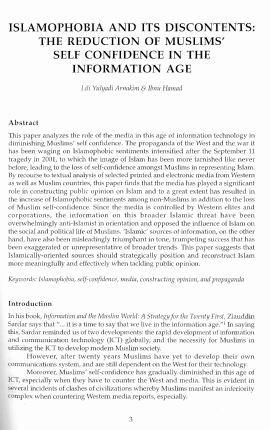 This paper analyzes the role of the media in this age of information technology in diminishing Muslims' self confidence. The propaganda of the West and the war it has been waging on Islamophobic sentiments intensified after the September 11 tragedy in 2001, to which the image of Islam has been more tarnished like never before, leading to the loss of self-confidence amongst Muslims in representing Islam. By recourse to textual analysis of selected printed and electronic media from Western as well as Muslim countries, this paper finds that the media has played aa significant role in constructing public opinion on Islam and to a great extent has resulted in the increase of Islamophobic sentiments among non-Muslims in addition to the loss of Muslim self-confidence. Since the media is controlled by Western elites and corporations, the information on this broader Islamic threat have been overwhelmingly anti-Islamist in orientation and opposed the influence of Islam on the social and political life of Muslims. 'Islamic' sources of information, on the other hand, have also been misleadingly triumphant in tone, trumpeting success that has been exaggerated or unrepresentative of broader trends. This paper suggests that Islamically-oriented sources should strategically position and reconstruct Islam more meaningfully and effectively when tackling public opinion.

These guidelines are fully consistent with the COPE Principles of Transparency and Best Practice Guidelines and the COPE Code of Conduct (https://publicationethics.org).

We encourage the best standards of publication ethics and take all possible of principles of transparency and measures against publication malpractices. The Department of Southeast Asian Studies as the publisher plays its roles of guardianship over all processes of publishing seriously and we perform our ethical and other tasks.