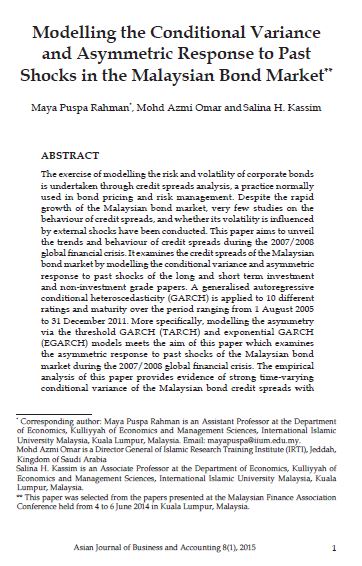 The exercise of modelling the risk and volatility of corporate bonds is undertaken through credit spreads analysis, a practice normally used in bond pricing and risk management. Despite the rapid growth of the Malaysian bond market, very few studies on the behaviour of credit spreads, and whether its volatility is influenced by external shocks have been conducted. This paper aims to unveil the trends and behaviour of credit spreads during the 2007/2008 global financial crisis. It examines the credit spreads of the Malaysian bond market by modelling the conditional variance and asymmetric response to past shocks of the long and short term investment and non-investment grade papers. A generalised autoregressive conditional heteroscedasticity (GARCH) is applied to 10 different ratings and maturity over the period ranging from 1 August 2005 to 31 December 2011. More specifically, modelling the asymmetry via the threshold GARCH (TARCH) and exponential GARCH (EGARCH) models meets the aim of this paper which examines the asymmetric response to past shocks of the Malaysian bond market during the 2007/2008 global financial crisis. The empirical analysis of this paper provides evidence of strong time-varying conditional variance of the Malaysian bond credit spreads with the expectation of future rate being the main determinant for credit spreads. Additionally, the evidence also indicates that past news or shocks as well as forecast variance are important in explaining the volatility of the spreads. The insignificant TARCH and EGARCH coefficients, nonetheless, indicate that there is no evidence of asymmetric response to past shocks in the volatility of bond spreads.
Keywords: Credit Spreads Analysis, EGARCH, GARCH, Malaysian Bond Market, TARCH, Volatility
JEL Classification: C58, G01, G12