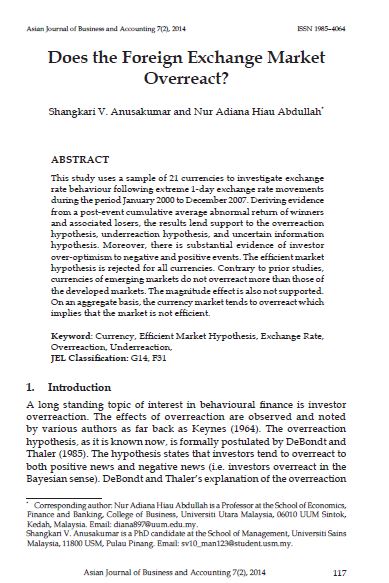 This study uses a sample of 21 currencies to investigate exchange rate behaviour following extreme 1-day exchange rate movements during the period January 2000 to December 2007. Deriving evidence from a post-event cumulative average abnormal return of winners and associated losers, the results lend support to the overreaction hypothesis, underreaction hypothesis, and uncertain information hypothesis. Moreover, there is substantial evidence of investor over-optimism to negative and positive events. The efficient market hypothesis is rejected for all currencies. Contrary to prior studies, currencies of emerging markets do not overreact more than those of the developed markets. The magnitude effect is also not supported. On an aggregate basis, the currency market tends to overreact which implies that the market is not efficient.
Keyword: Currency, Efficient Market Hypothesis, Exchange Rate, Overreaction, Underreaction,
JEL Classification: G14, F31