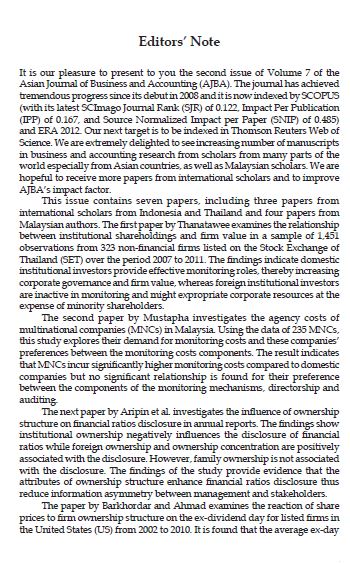 It is our pleasure to present to you the second issue of Volume 7 of the
Asian Journal of Business and Accounting (AJBA). The journal has achieved
tremendous progress since its debut in 2008 and it is now indexed by SCOPUS
(with its latest SCImago Journal Rank (SJR) of 0.122, Impact Per Publication
(IPP) of 0.167, and Source Normalized Impact per Paper (SNIP) of 0.485)
and ERA 2012. Our next target is to be indexed in Thomson Reuters Web of
Science. We are extremely delighted to see increasing number of manuscripts
in business and accounting research from scholars from many parts of the
world especially from Asian countries, as well as Malaysian scholars. We are
hopeful to receive more papers from international scholars and to improve
AJBA’s impact factor.
This issue contains seven papers, including three papers from
international scholars from Indonesia and Thailand and four papers from
Malaysian authors. The first paper by Thanatawee examines the relationship
between institutional shareholdings and firm value in a sample of 1,451
observations from 323 non-financial firms listed on the Stock Exchange of
Thailand (SET) over the period 2007 to 2011. The findings indicate domestic
institutional investors provide effective monitoring roles, thereby increasing
corporate governance and firm value, whereas foreign institutional investors
are inactive in monitoring and might expropriate corporate resources at the
expense of minority shareholders.
The second paper by Mustapha investigates the agency costs of
multinational companies (MNCs) in Malaysia. Using the data of 235 MNCs,
this study explores their demand for monitoring costs and these companies’
preferences between the monitoring costs components. The result indicates
that MNCs incur significantly higher monitoring costs compared to domestic
companies but no significant relationship is found for their preference
between the components of the monitoring mechanisms, directorship and
auditing.
The next paper by Aripin et al. investigates the influence of ownership
structure on financial ratios disclosure in annual reports. The findings show
institutional ownership negatively influences the disclosure of financial
ratios while foreign ownership and ownership concentration are positively
associated with the disclosure. However, family ownership is not associated
with the disclosure. The findings of the study provide evidence that the
attributes of ownership structure enhance financial ratios disclosure thus
reduce information asymmetry between management and stakeholders.
The paper by Barkhordar and Ahmad examines the reaction of share
prices to firm ownership structure on the ex-dividend day for listed firms in
the United States (US) from 2002 to 2010. It is found that the average ex-day price drop ratio increases after the implementation of the US Tax Act 2003 and ex-dividend day pricing forms a negative concave function of firms’ individual ownership. This evidence strongly supports the tax-induced dynamic trading theory and is consistent with both tax clientele and short selling hypotheses.
The paper by Achjari and Wahyuningtyas provides evidence on the impact of Information Technology (IT) investment announcements on firms’ value in the Indonesian financial and non-financial sectors. Using event study methodology to capture 91 events of IT project announcements from the period of 2000 to 2007, the results reveal indifferent market reaction to the IT investment announcements by firms in both financial and non-financial sectors.
The next paper by Shangkari and Abdullah provides evidence on exchange rate behaviour following extreme 1-day exchange rate movements during the period of January 2000 to December 2007. The findings lend support to overreaction hypothesis, underreaction hypothesis, and uncertain information hypothesis. Overall, the study shows that the currency market tends to overreact, thus suggesting it is not efficient.
The final paper is by Suttipun, which is timely and of much relevance to the ASEAN community as we usher in 2015. It investigates the competencies of Thai accounting students and their readiness for the ASEAN Economic Community (AEC) which will be established in 2015. Suttipun finds the level of the students’ readiness for the AEC, which is positively related to their capability, knowledge, ethical and relationship competencies, is only at the medium high.
We would like to take this opportunity to extend our sincere appreciation to Prof Dr Susela Devi for her excellent service as the journal’s chief editor for 4 years, from 2010 to 2014. Under her leadership, the journal has achieved a very important milestone, indexing by SCOPUS in 2012. This has enhanced AJBA’s reputation tremendously as can be seen in the dramatic increase in the number of paper submissions to the journal. Our sincere gratitude also goes to all our area editors, members of the editorial board and advisory board and reviewers for their continued support and commitment.