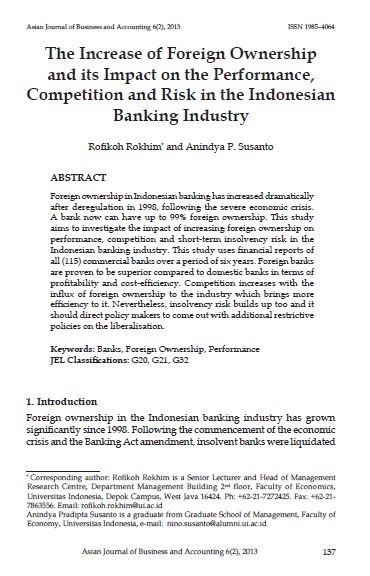 Foreign ownership in Indonesian banking has increased dramatically after deregulation in 1998, following the severe economic crisis. A bank now can have up to 99% foreign ownership. This study aims to investigate the impact of increasing foreign ownership on performance, competition and short-term insolvency risk in the Indonesian banking industry. This study uses financial reports of all (115) commercial banks over a period of six years. Foreign banks are proven to be superior compared to domestic banks in terms of profitability and cost-efficiency. Competition increases with the influx of foreign ownership to the industry which brings more efficiency to it. Nevertheless, insolvency risk builds up too and it should direct policy makers to come out with additional restrictive policies on the liberalisation.
Keywords: Banks, Foreign Ownership, Performance
JEL Classifications: G20, G21, G32