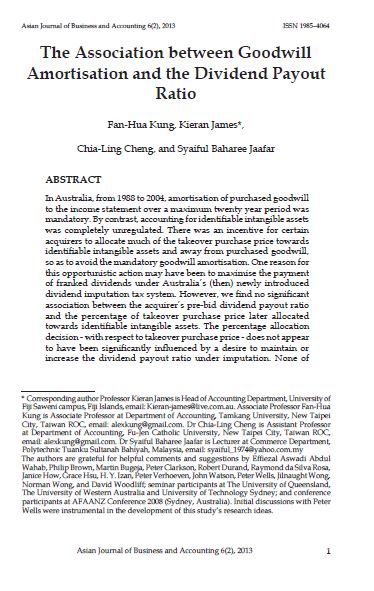 In Australia, from 1988 to 2004, amortisation of purchased goodwill to the income statement over a maximum twenty year period was mandatory. By contrast, accounting for identifiable intangible assets was completely unregulated. There was an incentive for certain acquirers to allocate much of the takeover purchase price towards identifiable intangible assets and away from purchased goodwill, so as to avoid the mandatory goodwill amortisation. One reason for this opportunistic action may have been to maximise the payment of franked dividends under Australia’s (then) newly introduced dividend imputation tax system. However, we find no significant association between the acquirer’s pre-bid dividend payout ratio and the percentage of takeover purchase price later allocated towards identifiable intangible assets. The percentage allocation decision - with respect to takeover purchase price - does not appear to have been significantly influenced by a desire to maintain or increase the dividend payout ratio under imputation. None of our control variables are significant except for the target’s pre-bid investment opportunity set which is only significant using one of our three proxy measures for this variable (the earnings-to-price ratio).
Keywords: Accounting Policy Choice, Dividend Payout Ratio, Goodwill, Identifiable Intangible Assets, Intangible Assets, Purchased Goodwill