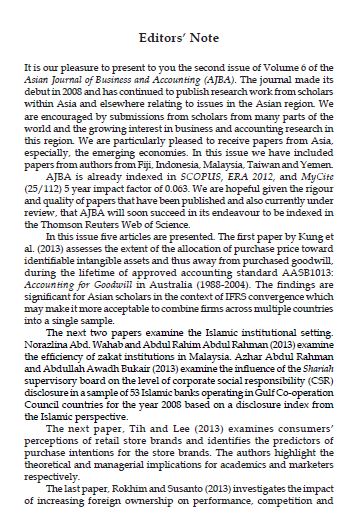 It is our pleasure to present to you the second issue of Volume 6 of the
Asian Journal of Business and Accounting (AJBA). The journal made its
debut in 2008 and has continued to publish research work from scholars
within Asia and elsewhere relating to issues in the Asian region. We
are encouraged by submissions from scholars from many parts of the
world and the growing interest in business and accounting research in
this region. We are particularly pleased to receive papers from Asia,
especially, the emerging economies. In this issue we have included
papers from authors from Fiji, Indonesia, Malaysia, Taiwan and Yemen.
AJBA is already indexed in SCOPUS, ERA 2012, and MyCite
(25/112) 5 year impact factor of 0.063. We are hopeful given the rigour
and quality of papers that have been published and also currently under
review, that AJBA will soon succeed in its endeavour to be indexed in
the Thomson Reuters Web of Science.
In this issue five articles are presented. The first paper by Kung et
al. (2013) assesses the extent of the allocation of purchase price toward
identifiable intangible assets and thus away from purchased goodwill,
during the lifetime of approved accounting standard AASB1013:
Accounting for Goodwill in Australia (1988-2004). The findings are
significant for Asian scholars in the context of IFRS convergence which
may make it more acceptable to combine firms across multiple countries
into a single sample.
The next two papers examine the Islamic institutional setting.
Norazlina Abd. Wahab and Abdul Rahim Abdul Rahman (2013) examine
the efficiency of zakat institutions in Malaysia. Azhar Abdul Rahman
and Abdullah Awadh Bukair (2013) examine the influence of the Shariah
supervisory board on the level of corporate social responsibility (CSR)
disclosure in a sample of 53 Islamic banks operating in Gulf Co-operation
Council countries for the year 2008 based on a disclosure index from
the Islamic perspective.
The next paper, Tih and Lee (2013) examines consumers’
perceptions of retail store brands and identifies the predictors of
purchase intentions for the store brands. The authors highlight the
theoretical and managerial implications for academics and marketers
respectively.
The last paper, Rokhim and Susanto (2013) investigates the impact
of increasing foreign ownership on performance, competition and
Asian Journal of Business and Accounting 6(2), 2013 vii
short-term insolvency risk in the Indonesian banking industry. They
conclude that foreign ownership appears to impact the Indonesian
banking industry favourably, although caution is advised in respect of
increasing insolvency risk.
We would like to welcome Dr Chan Wai Meng as the new deputy
chief editor who assumed duties in July 2013. Our sincere appreciation
is extended to all our area editors, members of the editorial board
and advisory board and reviewers for their continued support and
encouragement. We hope this issue brings AJBA closer to achieving
its mission to incrementally provide a voice for scholars embarking on
Asia-focused research.