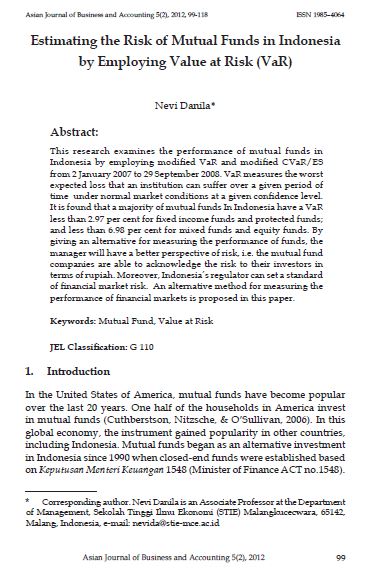 This research examines the performance of mutual funds in Indonesia by employing modified VaR and modified CVaR/ES from 2 January 2007 to 29 September 2008. VaR measures the worst expected loss that an institution can suffer over a given period of time under normal market conditions at a given confidence level. It is found that a majority of mutual funds In Indonesia have a VaR less than 2.97 per cent for fixed income funds and protected funds; and less than 6.98 per cent for mixed funds and equity funds. By giving an alternative for measuring the performance of funds, the manager will have a better perspective of risk, i.e. the mutual fund companies are able to acknowledge the risk to their investors in terms of rupiah. Moreover, Indonesia’s regulator can set a standard of financial market risk. An alternative method for measuring the performance of financial markets is proposed in this paper.
Keywords: Mutual Fund, Value at Risk