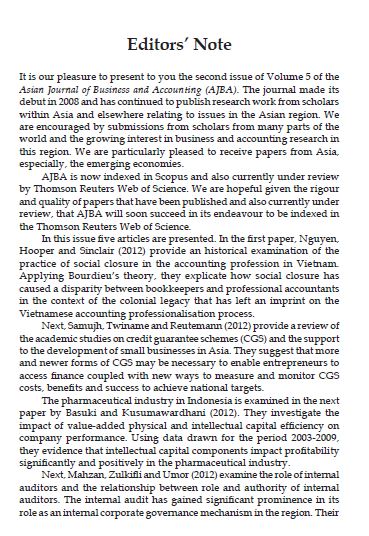 It is our pleasure to present to you the second issue of Volume 5 of the Asian Journal of Business and Accounting (AJBA). The journal made its debut in 2008 and has continued to publish research work from scholars within Asia and elsewhere relating to issues in the Asian region. We are encouraged by submissions from scholars from many parts of the world and the growing interest in business and accounting research in this region. We are particularly pleased to receive papers from Asia, especially, the emerging economies.
AJBA is now indexed in Scopus and also currently under review by Thomson Reuters Web of Science. We are hopeful given the rigour and quality of papers that have been published and also currently under review, that AJBA will soon succeed in its endeavour to be indexed in the Thomson Reuters Web of Science.
In this issue five articles are presented. In the first paper, Nguyen, Hooper and Sinclair (2012) provide an historical examination of the practice of social closure in the accounting profession in Vietnam. Applying Bourdieu’s theory, they explicate how social closure has caused a disparity between bookkeepers and professional accountants in the context of the colonial legacy that has left an imprint on the Vietnamese accounting professionalisation process.
Next, Samujh, Twiname and Reutemann (2012) provide a review of the academic studies on credit guarantee schemes (CGS) and the support to the development of small businesses in Asia. They suggest that more and newer forms of CGS may be necessary to enable entrepreneurs to access finance coupled with new ways to measure and monitor CGS costs, benefits and success to achieve national targets.
The pharmaceutical industry in Indonesia is examined in the next paper by Basuki and Kusumawardhani (2012). They investigate the impact of value-added physical and intellectual capital efficiency on company performance. Using data drawn for the period 2003-2009, they evidence that intellectual capital components impact profitability significantly and positively in the pharmaceutical industry.
Next, Mahzan, Zulkifli and Umor (2012) examine the role of internal auditors and the relationship between role and authority of internal auditors. The internal audit has gained significant prominence in its role as an internal corporate governance mechanism in the region. Their
Editors’ Note
Asian Journal of Business and Accounting 5(2), 2012
vii
findings suggest that internal auditors need to be given clear authority to determine their roles and responsibilities as appropriate.
The final paper by Danila (2012) examines the performance of mutual funds in Indonesia using a modified Value at Risk model. An alternative measure of performance of funds is suggested in this paper. It is found that a majority of Indonesian mutual funds have low risk. An understanding of the risk will assist fund managers in diversifying their portfolio.
In conclusion we thank all our area editors, members of the editorial board and advisory board and reviewers for their continued support and encouragement. We also thank our sponsor, the Malaysian Accountancy Research & Education Foundation (MAREF) for the continued support. We hope this issue brings AJBA closer to achieving its mission to incrementally provide a voice for scholars embarking on Asia-focused research.