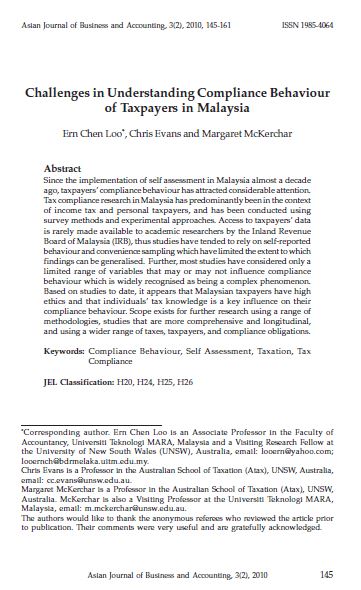 Since the implementation of self assessment in Malaysia almost a decade
ago, taxpayers’ compliance behaviour has attracted considerable attention.
Tax compliance research in Malaysia has predominantly been in the context
of income tax and personal taxpayers, and has been conducted using
survey methods and experimental approaches. Access to taxpayers’ data
is rarely made available to academic researchers by the Inland Revenue
Board of Malaysia (IRB), thus studies have tended to rely on self-reported
behaviour and convenience sampling which have limited the extent to which
findings can be generalised. Further, most studies have considered only a
limited range of variables that may or may not influence compliance
behaviour which is widely recognised as being a complex phenomenon.
Based on studies to date, it appears that Malaysian taxpayers have high
ethics and that individuals’ tax knowledge is a key influence on their
compliance behaviour. Scope exists for further research using a range of
methodologies, studies that are more comprehensive and longitudinal,
and using a wider range of taxes, taxpayers, and compliance obligations.