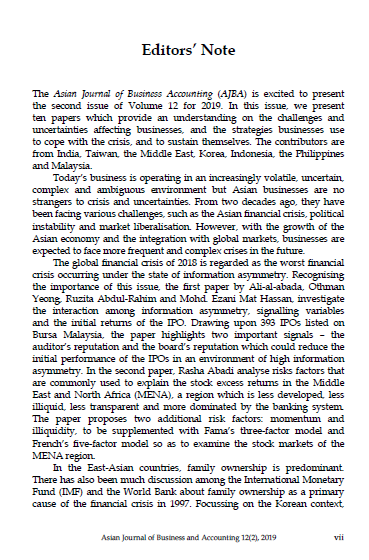 The Asian Journal of Business Accounting (AJBA) is excited to present the second issue of Volume 12 for 2019. In this issue, we present ten papers which provide an understanding on the challenges and uncertainties affecting businesses, and the strategies businesses use to cope with the crisis, and to sustain themselves. The contributors are from India, Taiwan, the Middle East, Korea, Indonesia, the Philippines and Malaysia.

Today’s business is operating in an increasingly volatile, uncertain, complex and ambiguous environment but Asian businesses are no strangers to crisis and uncertainties. From two decades ago, they have been facing various challenges, such as the Asian financial crisis, political instability and market liberalisation. However, with the growth of the Asian economy and the integration with global markets, businesses are expected to face more frequent and complex crises in the future.

The global financial crisis of 2018 is regarded as the worst financial crisis occurring under the state of information asymmetry. Recognising the importance of this issue, the first paper by Ali-al-abada, Othman Yeong, Ruzita Abdul-Rahim and Mohd. Ezani Mat Hassan, investigate the interaction among information asymmetry, signalling variables and the initial returns of the IPO. Drawing upon 393 IPOs listed on Bursa Malaysia, the paper highlights two important signals – the auditor’s reputation and the board’s reputation which could reduce the initial performance of the IPOs in an environment of high information asymmetry. In the second paper, Rasha Abadi analyse risks factors that are commonly used to explain the stock excess returns in the Middle East and North Africa (MENA), a region which is less developed, less illiquid, less transparent and more dominated by the banking system. The paper proposes two additional risk factors: momentum and illiquidity, to be supplemented with Fama’s three-factor model and French’s five-factor model so as to examine the stock markets of the MENA region.

In the East-Asian countries, family ownership is predominant. There has also been much discussion among the International Monetary Fund (IMF) and the World Bank about family ownership as a primary cause of the financial crisis in 1997. Focussing on the Korean context, the subsequent paper by Sang-Ho Kim and Yohan An examine the impact of family ownership on earnings quality in the post crisis period of 2000 to 2012. They found that family ownership is positively associated with earnings quality, value-relevance and accruals quality. However, ownership-control disparity does not reduce the earnings quality. This suggests that the controlling family shareholders of the chaebol firms have a dominant influence on firms which they invested in by using affiliated ownership. In a turbulent environment, the financial sustainability of a firm depends on the returns earned by shareholders through their investment. In the fourth article, Nishant Lubhane examines the impact of catering incentives of dividends on the propensity to pay dividends, and the dividend payout levels of listed firms in India during the period of 1994-95 to 2014-15, which is considered as India’s period of liberalisation.

In relation to firms’ financial earnings, it has also become commonplace for firms to practice tax avoidance as a business strategy to improve firm reputation and share prices. Recently, Korea has introduced a new tax policy called the trusted taxpayer’s system, which focusses more on rewarding faithful tax payments rather than on punishing tax avoidances. In the next paper, Jung-Wha Suh, Ho- Young Lee, Arnold Edward Kuk and Hyunsoo Ryu uncover that firms designated as trusted taxpayers are less likely to avoid taxes than firms not designated. It also appears that firms with CEOs who come from founding families, firms that are non-SMEs (other than small and medium sized firms defined by the Small Business Act of Korea), and firms whose majority shareholder ownership is greater than the median, are less likely to avoid taxes.
The complexities and volatilities of the global environment have also pressured service firms to terminate their complacent approach, and to look for more strategic tools which can help them to remain competitive. Drawing upon the data collected from service firms in Malaysia, Gheyath Ghassan, Ruhanita Maelah, Amizawati Mohd Amir, and Mohammed Fadhil Farhan evaluate how the total quality management (TQM) approach, which had originated from the manufacturing industry, influenced organisational performance. The economic integration under the internalisation era has also posed risks to the human capital. They have caused leadership development of universities offering Accountancy Progammes in the Philippines to come under immense scrutiny. The next paper by John Christian Cha, James Thadeo Calleja, Patrick Giorgio Mendoza, Jose Luis Yupangco and Rodiel C. Ferrer investigate how leadership styles, and the demographic profiles of academic administrators and faculty members can influence the university students’ performance in the Board Licensure Examination for Certified Public Accountants (BLECPA) in the Philippines. The study found that different leadership styles promote different developments. There is no one-size fits all type of approach since different organisations may have different cultural values. Looking at the contemporary workplace setting and organisational leadership, Mingchang Wu, Deni Danial Kesa, and Chen-Ju Ko examine the interaction among organisational cohesiveness, power and culture. They note that in today’s work environment, employees experience severe stress and high pressure as they face numerous challenges in performing work tasks. This situation has led to the importance of organisational cohesiveness, an element which helps employees to renew their energy.

The scale and scope of today’s risks also require that business leaders be more thoughtful in devising strategies to support future plans. In the ninth paper, Harry Patria conducts a bibiliometric analysis on the intellectual structure, and the scientific evolution of strategic decision as a vision for researchers in the field. While social media has helped human beings to grow vastly; it has also served as a medium for electronic advertisements. Thus, social media may cause risks to businesses, if not well-managed. In relation to this, the final paper in this issue as written by Phang, Ing and Goh, Yee Shien, investigate how cognitive network and self-congruity affect offline brand outcomes of Instagram. Using data collected from Malaysian adults, the findings indicate that these brands must be categorised based on status and moral ties in order to target Instagram users who “follow” the brand.

The papers presented in this issue show that the environment is changing faster than ever before in many ways, thereby introducing new threats to businesses. This turbulent environment can be a difficult challenge for risk professionals. With business disruption being so common, unpredictable and expensive, organisations are required to respond to these risks aptly, and to find strategies to sustain themselves. It is believed that the ideas and recommendations offered in this issue could serve as important guidelines for organisations to address the emerging risks.

On a final note, we would like to thank the Malaysian Accountancy Research and Education Foundation as well as the Malaysian Ministry of Higher Education for the financial support extended. We also wish to say thank you to the members of our editorial and advisory boards as well as the reviewers for their time and effort put into AJBA. 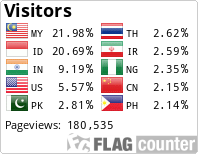