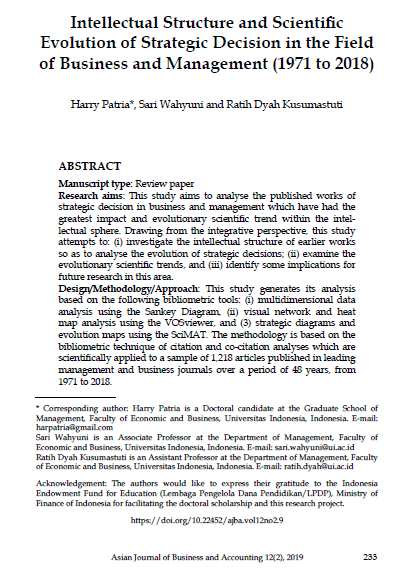 Manuscript type: Review paper
Research aims: This study aims to analyse the published works of strategic decision in business and management which have had the greatest impact and evolutionary scientific trend within the intellectual sphere. Drawing from the integrative perspective, this study attempts to: (i) investigate the intellectual structure of earlier works so as to analyse the evolution of strategic decisions; (ii) examine the evolutionary scientific trends, and (iii) identify some implications for future research in this area.
Design/Methodology/Approach: This study generates its analysis based on the following bibliometric tools: (i) multidimensional data analysis using the Sankey Diagram, (ii) visual network and heat map analysis using the VOSviewer, and (3) strategic diagrams and evolution maps using the SciMAT. The methodology is based on the bibliometric technique of citation and co-citation analyses which are scientifically applied to a sample of 1,218 articles published in leading management and business journals over a period of 48 years, from 1971 to 2018.
Research findings: The findings of this study plots the intellectual structure of the strategic decision as well as the evolutionary themes of the strategic decisions, for instance, decision-making and intuition (2000-2004), bounded rationality and uncertainty (2005-2009), decision support system and artificial intelligence (2010-2014), and decisionmaking and intuition (2015-2019). Overall, the results demonstrate the top scientific themes that were prevalent over a period of 48 years. The themes include: decision-making, intuition, rationality, behavioural economics, bounded rationality and investment decision.
Theoretical contribution/Originality: These findings provide valuable insights which demarcate the evolution of strategic decision as viewed through the synoptic-incremental continuum of rationality, intuition and political decision process. This study also contributes to the emerging role of behavioural economics on the strategic decisionmaking process in business and management. The results also highlight the role of the incremental decision process as an intuitive and political decision that can be interactively enhanced by decisionmakers while under increased risk and uncertainty.
Practitioner/Policy implications: The results of this study suggest that decision-makers need to pay attention towards building and developing the incremental process such as intuitive and political decision along with rationality so as to optimise the decision outcomes.
Keywords: Strategic Decision, Decision-Making, Bibliometric Review, Business, Management, Intuition, Rationality
JEL Classification: M10, Y3